Open a larger version of the following image in a popup:
Share

The statues, one on either side of the city, were unveiled today, in a ceremony that coincided with the thirty-fifth anniversary of the death of one of the founding members of the greatest ever Irish ballad group, The Dubliners.

Two sculptures of one of Dublin’s truly iconic sons, Luke Kelly, were unveiled by President Michael D Higgins, in the presence of the Lord Mayor of Dublin Nial Ring, today. Luke Kelly died, aged 43, in 1984.

The President gave a speech lasting over ten minutes, paying powerful tribute to Luke Kelly's social conscience and his deep affection for the people of Dublin – as well as his revered status as an artist and a singer.

Also in attendance at the ceremony were two of Ireland's finest contemporary musicians, Glen Hansard and Damien Dempsey, both of whom performed.

"Luke Kelly died exactly 35 year's ago today," President Michael D. Higgins said, "leaving behind a rich legacy of life and song that has continued to influence a new generation of Irish musicians and singers.

"Luke's passion for engagement with the lives being lived by those made marginal, be it emigrants, those working on the building sites in England, those excluded on the basis of their colour - that was a critical element of his life.

"He was an internationalist and a proud socialist. Luke had a unique ability to reimagine and reinterpret the traditional music which was experiencing a revival – a revival to which he made an immense contribution and which is identified so strongly with our culture and heritage.

"Luke never failed to seek and convey the human stories behind the songs he and The Dubliners immortalised: songs and renditions that have become deeply woven into the musical history of our nation.

"Today, as President, I say, it is an important day in the public cultural life of Ireland. The unveiling of his image as part of the public art of Dublin, and the nation, is a public recognition and an affirmation of the great admiration and affection, and I say love, with which Luke Kelly continues to be held across the country.

"For those of us who knew Luke, we remember him not only as a gifted and innovative musician, but a generous man with a profound social conscience – a conscience that extended far beyond these shores as Luke fought for the rights of citizens across the world.

"A committed socialist, he threw himself into many of the great battles for human rights that define that decade of promise that was the 1960s. Fighting against apartheid, we recall him doing the gigs in support of the anti apartheid movement. The Vietnam War, actively supporting nuclear disarmament. The challenge of racial discrimination and segregation in the United States of America. He moved easily from the world of song and music to the world of poetry and theatre and emancipatory politics in it's best sense."

The Lord Mayor of Dublin, Nial Ring added: "Luke Kelly's life and legacy cannot be separated from what it means to be a Dubliner or to work, live or visit this great city. These sculptures are a fitting tribute to the impact and influence of Luke Kelly. The strength of the love and regard with which his city, it's people and his family and friends have for Luke cannot be overemphasised."

Before singing the legendary Pete St. John song, 'The Rare Ould Times', written specially for The Dubliners, Damien Dempsey said: "Luke Kelly for me created an incredible vibration that has come down through generations, it goes into the hearts of people, and it makes them be better human beings. Míle buíochas, Luke Kelly, you changed the world, a great man."

Organised by Dublin City Council, the revealing of the sculptures ends a long-running rocky road between two sculptors and their patrons. In 2014, around the same time that Dublin City Council commissioned the artist Vera Klute to design a bust of the singer, another statue was offered to the city – designed and sculpted by John Coll. Reluctant to pull back from commissioning,  Klute’s vision of Luke Kelly, the council spent over a year deliberating, before deciding over what to do. In the end, separate places in the city for both statues of Luke Kelly were found.

Today, thirty-five years on from the death of the great Dublin hero, Coll’s bronze work of Kelly playing the banjo was revealed on South King Street, and Vera Klute’s marble bust was unveiled on Sheriff Street. Those in attendance, along with the President and Lord Mayor, included the singer's family and friends. 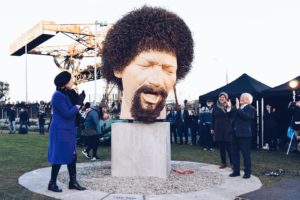 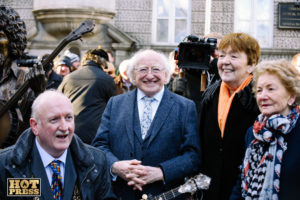 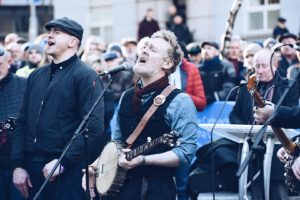 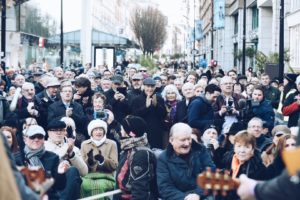 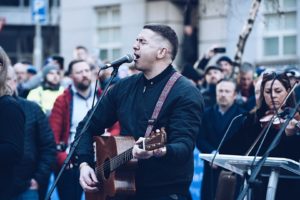 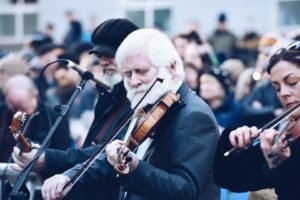 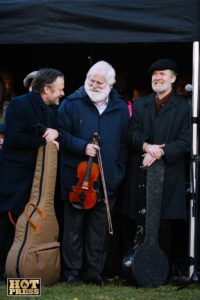