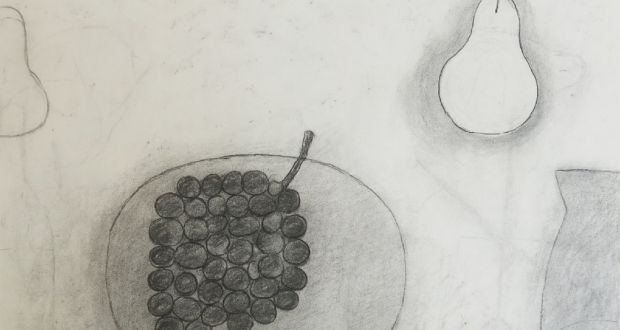 How was it done?

Scott is probably best known as a painter, but there is a strongly graphic character to much of his painting, and drawing was always important to him even though, until the early 1970s, he chose not to exhibit his drawings. It is as though, prior to this time, he regarded drawing as a mode of personal research and experimentation. The inclusion of drawings in two major shows of his work in 1971 and 1972 – to great acclaim – changed his mind, and from then on drawing was a significant, primary pursuit.   In 1975, the year he made this drawing, he noted that, more than a decade earlier he had, through a process of elimination, moved towards a mode of spare abstraction. But even his most abstract work seemed to retain connections with his pre-eminent subject, still life, or to a lesser extent with landscape or the human figure. He had a great sense of design in organising forms in space, and a sensitive feeling for line in delineating form. Visible revision was always part of a drawing for him, hence his choice of charcoal or soft lead pencil. He quoted Leonardo: “Drawing is the art of correction.” All of these qualities are evident in this beautifully judged still life drawing.

Where can I see it?

Is it a typical work by the artist?

It is typical of Scott in his artistic maturity. He is one of relatively few 20th century artists to have concentrated primarily on still life; Giorgio Morandi being perhaps the other most obvious example.     Scott was born in Greenock, Scotland, in 1913 to a Scottish mother and an Irish father, a sign-writer and decorator who had a yen to return to his hometown, Enniskillen. He did so when the young Scott was about 11 but, tragically, he was killed while attempting to rescue someone trapped in a burning building. Fortunately by then Scott was benefitting from art classes with progressive local teacher Kathleen Bridle. She encouraged him to study art and he did so, first in Belfast and then at the Royal Academy Schools in London (where he married a fellow student, Hilda Mary Lucas).     From early on he gravitated towards an elegantly simplified realism, finally finding a perfect vehicle in a series of postwar still life paintings, works that set him on a definite path forwards. He had spent the war years mostly working with the map-making section of the Royal Engineers. His stature grew immeasurably during the 1950s and from then until the early 1980s he produced an extensive and rigorously inventive body of work. He acknowledged the influence of both Egyptian and Japanese art.