John Behan article in Sunday Times
Open a larger version of the following image in a popup:
Share 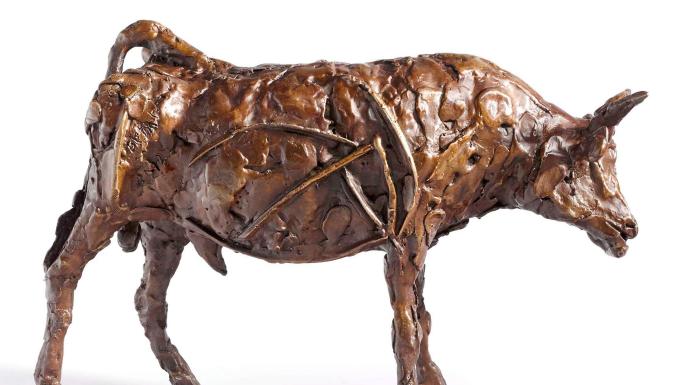 Bronze mettle: Behan’s new artworks have been influenced by his work with Syrian refugees and his days on the family farm

John Behan, who turns 80 this year, visited Athens recently to conduct workshops in theEleonas refugee camp, home to more than 2,000 Syrian refugees. Behan was a volunteer withProject Elea, which fosters creative engagement with the displaced Syrians to make their endless empty days more stimulating and productive.

Not surprisingly, he found personal inspiration in those art workshops, and this has found its way into hisexhibition of new bronzes and drawings in Dublin’s Solomon gallery. Entitled the Seven Ages of Man, the theme is explored in a series of seven bronze bulls. “I try to illustrate the bull’s journey through life,” he says.

These bronzes are shown alongside works that evoke the experience ofSyrian migrants. He saw a connection with those supplanted and scattered by the Famine, a recurring theme in his art, as in the life-size Arrival outside the UN building in New York. “What appeals to me is the parallel between their famine and our famine. They’re also on the sea and they’re vulnerable,” he says.

Meeting him in his quiet, canal-side house in the west of Galway city, you can see he retains an anger at injustice and the will to do something about it that made him a revolutionary figure in the Irish art scene 50 years ago. Given his history as an agitator for fair play in the arts, you expect an opinionated firebrand, but you get a gentle man whose features retain a boyish quality. He moved to the west in 1980 to focus more on his art and get away from the “art politics” of Dublin in which he had been embroiled. “I’d done my bit and I had to concentrate on my art,” he says.

No one familiar with the development of the visual arts in Ireland over the past 50 years could quibble about Behan doing “his bit”. He had a big role in democratising the practice and appreciation of visual arts. He fought against the attitude of people such as the gallerist David Hendricks, who told him: “You must realise art is a snobbish business. It’s only for certain people.”

In the 1960s and early 1970s, those with rougher edges and experimental urges were excluded from the polite worlds of the Royal Hibernian Academy and the Irish Exhibition of Living Art (IELA). The Arts Council, where the writ of Fr Donal O’Sullivan ruled, favoured socially acceptable practitioners such as Louis le Brocquy andPatrick Scott.

In 1963, Behan set up the NewArtists group with Charlie Cullen, Tadhg McSweeney, and Joseph O’Connor. They met in O’Donoghue’s pub on Merrion Row. “We had this idea of art for the people,” Behan recalls. The group merged with the Independent Artists, formed earlier by Noel Sheridan, Owen Walsh and Michael Kane. Behan accused the Arts Council of making funding decisions based on where artists came from, and gotsupport. A headline over AnthonyButler’s article in the Evening Press proclaimed “Artists call for the killing of the Arts Council”; Brian Fallon of The Irish Times said the council’s buying policy appeared “arbitrary and exclusive to the point of cliquishness”.

These young revolutionaries got their way in 1973 after Fine Gael returned to government and overhauled the Arts Council, making Behan a member and giving a voice to those disaffected outsiders. Behan was also involved in the foundation of the Project Arts Centre with Colm Ó Briain, another initiative aimed at democratising the arts. It started in 1967 in a room over Tuck and Company in Lower Abbey Street, where Behan staged its first exhibition: a set of lithographs.

Another signal achievement was the setting up of the Dublin Art Foundry with Leo Higgins, with financial aid from Ó Briain’s father, Peter. Prior to that, Irish sculptors had to send their work to England to be cast. The foundry was a labour of love. “I worked there for about 10 years for nothing,” Behan recalls. “It was a hell of a struggle, working seven days a week.”

Behan grew up in the industrial part of Dublin’s Sheriff Street, where his father had a corner shop. His parents had farming backgrounds: his mother’s people were sheep farmers in Donegal and his father came from “moresubstantial” stock in Laois. Behan spent summers there helping out, and recalls his first encounter with cattle. “They took our cow over to Hipwell’s bull to have it serviced,” he says. Although he acknowledges the influence of Thomas Kinsella’s translation of the Táin Bó Cúailnge on his art, this experience must have planted a seed.

Behan left education at an early age — “I’d had enough of the Christian Brothers at 11” — and enrolled at North Strand Technical School to follow a more practical curriculum. A teacher, Bill O’Brien, told Behan “your temperament is more suited to the visual arts”. He left at 15 to become an apprentice metal worker and attended the National College of Art and Design by night.

At 21 he made the decision to become a full-time sculptor. In 1960 he worked in London for a year to fund his ambitions. His visit coincided with a Picasso retrospective at the Tate, dubbed the “exhibition of the century”. Behan describes the show as “the breakthrough exhibition for modern art in the English-speaking world”. He discovered “a big world out there of history, art and culture. It woke me up to a completely different world.”

His breakthrough came when he had a bronze bull accepted by the IELA. He recalls how proud he was of the review in The Irish Times by James White, later a director of the National Gallery of Ireland, who admired its “simple and witty conception”.

The show at the Solomon is a tour de force. There is something poignant about seeing that potent symbol of virility, the bull, go through the stages of growth to disintegration. The works relating to the Syrian conflict may have a more immediate relevance, none more so than Alan Kurdi, which captures the appalling image of a small boy being carried off Turkish waters by a rescue worker. Elsewhere he highlights the parallels between our history and the refugee catastrophe by juxtaposing his famine ships with the less substantial ribs used by fleeing Syrians.

Behan intends to return toAthens to continue his work with the Syrian migrants. Having done his bit for Irish art, his zeal for supporting the underdog endures.