Light, mist and wonder from Leah Beggs and a group of four artists explore creativity through chance in Some Concrete Possibilites 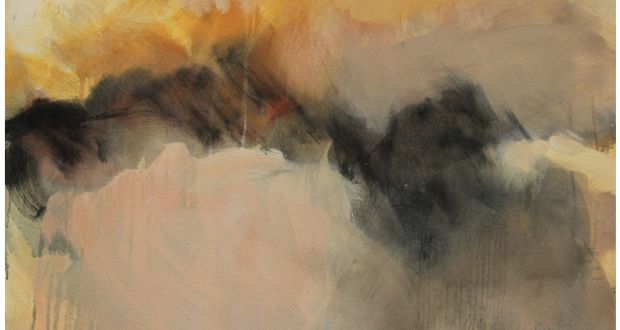 Detail from Leah Beggs, Should Have Gone With You, at the Solomon Gallery

William Hazlitt once famously dismissed the paintings of JMW Turner as “pictures of nothing and very like”. He meant it as an insult, but actually it was close enough to being a reasonable description of what Turner was trying to do. It’s just that Hazlitt couldn’t see the point of what he was trying to do. His words could equally serve to describe Leah Begg’s paintings in The Space Between, in which she largely dispenses with the solid matter of the world in favour of the air, light, mist, cloud and water that lies between.

She does ground the larger oils, however, in a series of fine small acrylic studies that are more conventionally representational, coming across as direct responses to the landscape. And presumably that landscape is not a million miles away from the artist’s home in Oughterard, Connemara. Certainly the palette looks appropriate, and much else about the paintings. Not least their watery character. Beggs uses liberally diluted washes of oil paint, with plentiful drips, in a way that recalls Barrie Cooke’s work. The dilute pigment, and the spirit of the work, that is, as in Cooke’s Heraclitian motto “everything flows”, rather than any direct visual resemblance. Classical Chinese painting also comes to mind.

Besides the washes, she does accrete more opaque coats of pigment, not to the point of building up any degree of impasto, but enough to generate a sense of mass. These masses can be as pale as cloud or mist, or as dark and dense as sodden bogland – or pale and dark as cloud against bogland. But in essence she is not so much trying to figure out a way to depict something as she is drawing on the environment around her, and her experience of it, to devise a pictorial language that is robustly complete and true.

She certainly does so. That’s particularly evident when you see the work in reality: reproductions don’t do it justice. She is measured and very sound in her use of colour, which is to say, she is restrained, but exact. Tonally she pushes things a bit more, generating considerable contrasts, for example, but always to great effect. The longer you look at each piece, the more its strengths become apparent, and that is a real test.